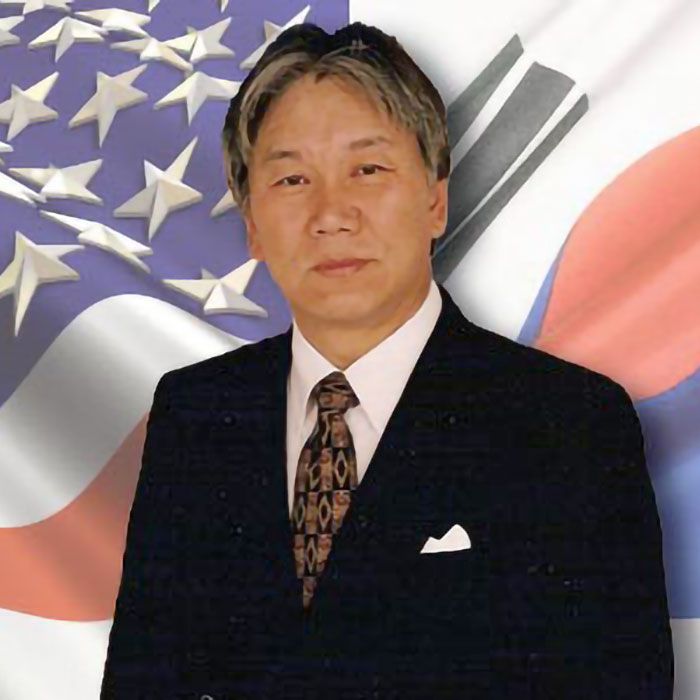 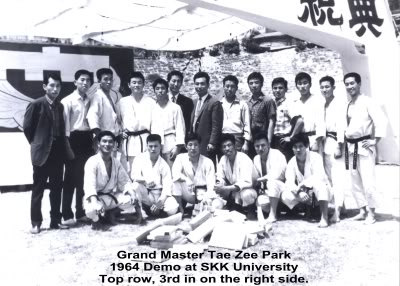 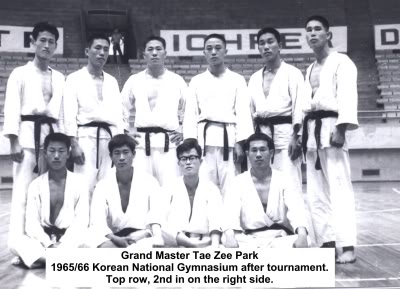 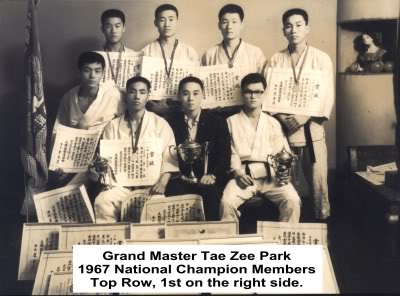 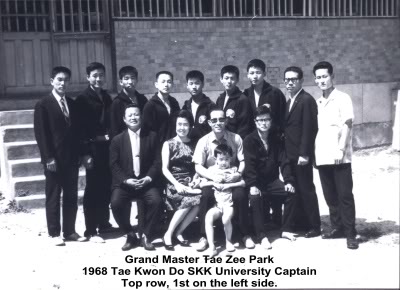 The Life of Grandmaster Park

Many years ago, in South Korea, a shy young boy named Tae Zee Park watched helplessly as a bully hit the young boy’s mother. Even though the community rallied together to run the bully out of town, Grandmaster Park decided, then and there that he would be ready the next time someone tried to hurt his family. So, the young Grandmaster Park learned a little soccer and a little boxing, but he learned to love Tae Kwon Do.

Grandmaster Park started Tae Kwon Do lessons when he was twelve years old. Five days each week for at least two hours a day, young Grandmaster Park would practice basic patterns, kicks, and forms. He wanted to be strong and responsible and to hold his own among his six brothers and sisters. Very few of the other students in his class worked as hard as he did.

When Grandmaster Park was sixteen, he became one of the youngest first-degree black belts in Korea. At his first-degree test, he was rewarded the highest points in forms and free fighting, but his goal was to become even better. He left home and went to the central studio to practice and study. After earning his second degree, Grandmaster Park entered his first tournament.

Korean martial art tournaments were very dangerous. Participants risked serious accidents- even death- to win because winning meant great honor for the fighter’s school and it’s reputation. Everyone knew who the tournament winners were, and they were given many special privileges.

Each Tae Kwon Do school sent their top one or two fighters to compete. Each fight consisted of three three-minute rounds. As long as a competitor won, he could progress to the next round. If he lost, he went back home. In addition to being very good, tournament fighters had to be very strong and in excellent shape. Sometimes a competitor would have fought for five days in a row to qualify for the final rounds.

Grandmaster Park completed his formal education at Sung Kyun University, where he graduated with a major in Government. In addition to his scholastic pursuits, this very special school allowed him to study Tae Kwon Do up to five hours a day. All 350 people in his freshman class were black belts. Grandmaster Park was one of the only two or three students picked for special training as part of the university team. He and the other team members worked very hard and received many high honors. In 1964 and 1965, Grandmaster Park was the top tournament fighter in all of Korea.

The once shy boy had grown into a strong and brave young man.

After graduating from the university, Grandmaster Park was recruited for the Korean Army’s Tae Kwon Do team. For the next three years, his full-time job was to represent Korea in international tournaments. He had become the equivalent of a professional athlete. Everyone knew his face and he was very well respected.

After army service, Grandmaster Park taught for one year at the Korean National Teachers College, where he earned his sixth dan. He had loved practicing Tae Kwon Do and now he loved teaching it to others.

When, Grandmaster Park first came to America, in 1974, he taught martial arts at Kent State University in Ohio as an exchange student. He later moved to Michigan and began teaching Tae Kwon Do at the YMCA in Jackson. It was there that he learned about America from his students. Grandmaster Park would teach them martial art and his students would teach him the English language and American customs. He learned what Americans believed and how they made decisions. This interdependence on his students helped form life-long bonds.

Grandmaster Park had proven in Korea that he was an excellent fighter and teacher. But now he was in America where the peoples’ wants and customs were very different. He started his first Tae Kwon Do class in 1974. But it closed after only two months. Grandmaster Park believes that the advanced techniques he taught were too difficult for beginning students, who quickly became frustrated and stopped coming to class.

There were 18 testing for 1st Dan:

There was one testing for 2nd Dan:

Over thirty-five years have passed since Grandmaster Park came to America to teach Tae Kwon Do. Today, Tae Park Institute has schools in fifteen states and many Michigan locations. There are over 2,000 black belts with over 50 Master, 7 Senior Master, and 5 Junior Grandmaster and 1 Grandmaster Instructors.